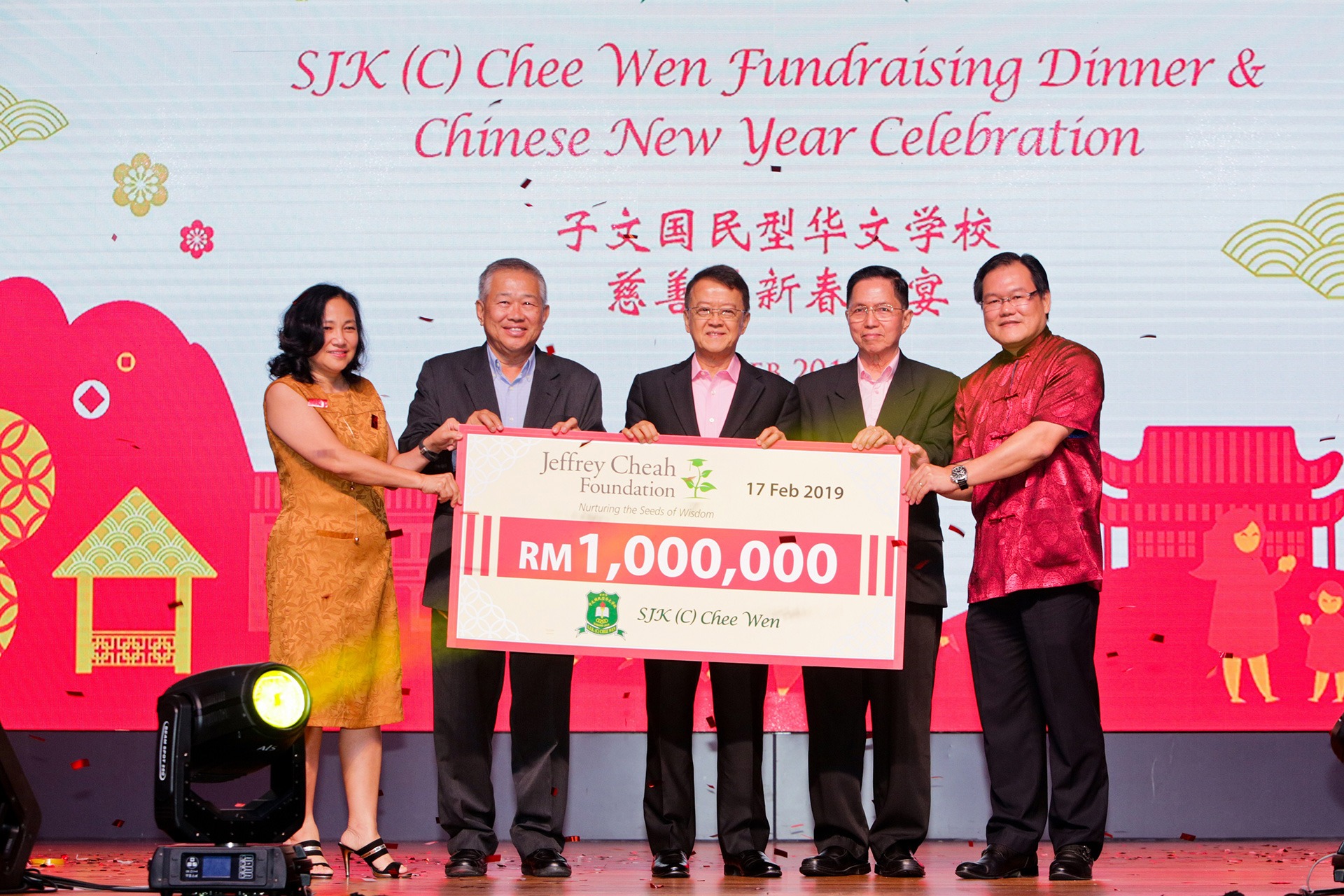 Jeffrey Cheah Foundation (JCF) hosted a fundraising dinner for SJK(C) Chee Wen at Sunway Resort Hotel & Spa and announced a total donation of RM 1 million for the schoolâs restoration work and enhancement today. This marks a total of more than RM 5 million contribution from JCF and Tan Sri Dr Jeffrey Cheah to the school since 2007.

SJK(C) Chee Wen Principal, Pang Lai Cheun, said that with the contribution, the school will be able to improve its facilities and provide an improved learning environment for its students.

âTan Sri Dr Jeffrey Cheah has been our single biggest benefactor since he personally adopted the school in 2007, and we have to thank him for his dedication to making quality education a reality for all of us here at SJK(C) Chee Wen. With his generous help through the years, our teachers have been able to dedicate time to focus mentoring and guiding the students instead of being concerned with the maintenance and upkeep of the school.â

She said that the funding will go towards multiple urgent repairs, upgrades to the schoolâs buildings, washrooms and sporting facilities amongst others, which will foster a more conducive learning environment.

SJK(C) Chee Wen was founded in 1939. The 80-year-old school was then located at Sungai Tinggi, Kuala Selangor. In 2001, it was relocated to Subang Jaya and has seen more than 10,000 graduates since. Currently, the school has over 2000 students and teachers.

Donors were treated to a delicious dinner and a series of festive cultural performances including Diabolo performance and Chinese traditional dance by the students of SJK(C) Chee Wen, jazz performance on unicycles by Sunway International School students and special tribute performance to the legendary songstress, Teresa Teng.

The primary school is one of the nine schools nationwide that has benefitted from the contributions by Tan Sri Dr Jeffrey Cheah, and the Jeffrey Cheah Foundation.

Launched in 2010, the Jeffrey Cheah Foundation was established by Tan Sri Dr Jeffrey Cheah and continues the mandate of the Sunway Education Trust which was established in 1997. It is the largest education-focused social enterprise in the nation which aims to make quality education accessible. In total, Tan Sri Dr Jeffrey Cheah has contributed RM 25 million to fund upgrading and restoration works in nine schools nationwide, including SJK(C) Cheah Fah which is currently under construction in Johor.

For more information on the education advancement efforts by the Jeffrey Cheah Foundation, please visit https://jeffreycheah.foundation/